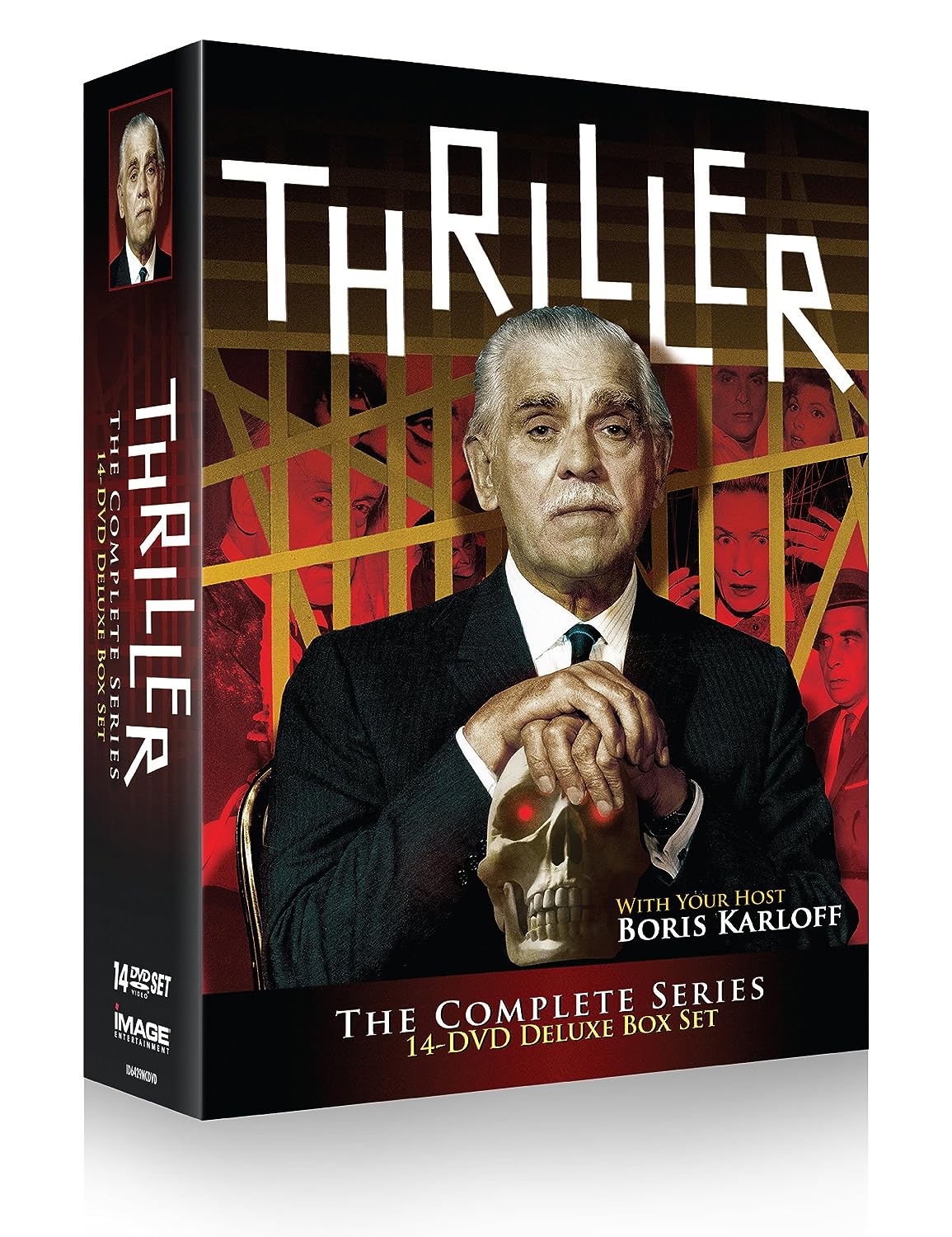 Now available for the first time ever in any format, experience the complete series hailed as the most frightening ever created for television. Horror legend Boris Karloff (Frankenstein) guides you through 67 unforgettable episodes of suspense, murder and relentless terror, featuring a stellar cast of stars from the golden age of TV. These tales from the minds of such masterful writers as Edgar Allan Poe, Robert Bloch (Psycho), and Cornell Woolrich (Rear Window) include a murderous cursed painting, a supernatural mirror, a demonic tailor's suit, and much more.

Image Entertainment's 14-disc presentation of the acclaimed anthology series Thriller is arguably among the most anticipated DVD releases for horror fans and vintage-TV aficionados alike. Hosted by screen legend Boris Karloff, who also appeared in five episodes of the series, and aired on NBC from 1960 to 1962, Thriller immediately earned a reputation as one of the most frightening programs ever broadcast on television--a legacy that endures some four decades after it left the airwaves. Though it featured an all-star lineup both in front of and behind the camera--actors such as William Shatner, Richard Chamberlain, Rip Torn, Leslie Nielsen, Elizabeth Montgomery, Warren Oates, Robert Vaughn, and Marlo Thomas were among its guest stars, while directors included veterans like John Brahm (The Lodger), John Newland (One Step Beyond), and actor-directors Ida Lupino, Paul Henreid, and Ray Milland--the chills of Thriller hinged on its stories. Psycho author Robert Bloch adapted several of his short tales for the series, including one of its most nerve-jangling episodes, "The Cheaters," about a pair of glasses that reveal terrifying truths to the wearer. Twilight Zone scribes Richard Matheson and Charles Beaumont also contributed scripts, while others were based on stories by Cornell Woolrich, Edgar Allan Poe, and Conan creator Robert E. Howard; the latter provided the source material for "Pigeons from Hell," the episode widely regarded as the most terrifying of the series, with Brandon De Wilde as a young man who encounters restless spirits and a unique monster in an abandoned Southern mansion. Other standouts include Bloch's "The Grim Reaper," about a cursed portrait that brings death to its owners (including Shatner); "The Purple Room," with Torn as the skeptical inheritor of a haunted house, which viewers will immediately recognize as the Bates home from Alfred Hitchcock's Psycho; and "La Strega," with Ursula Andress as a young woman bedeviled by her sorceress aunt.

The 14-disc Thriller: The Complete Series offers all 67 episodes of the series, each remastered and uncut for the first time since their original broadcast. Some 50 hours of supplemental features have also been included; chief among these are 24 hours of commentary tracks by Thriller participants like directors Arthur Hiller and Ted Post and actors Richard Anderson and Beverly Washburn (Spider Baby), as well as genre experts like Tim Lucas, David Schow, Gary Gerani, and Lucy Chase Williams. Episode promos and isolated score tracks by composers Jerry Goldsmith (The Omen) and Morton Stevens all help to underscore why no less an authority than Stephen King declared Thriller to be the best series of its type to ever air on television. --Paul Gaita

We chatted with the late Karloff's daughter, Sara--who runs Karloff Enterprises to preserve, protect, and share her father's memories--about her famous father and the Thriller series.

Question: Thriller has been something of a Holy Grail for fans of suspense and horror and television. It must be a source of considerable pride to see it finally arrive on legitimate DVD.

We use cookies on our website to give you the most relevant experience by remembering your preferences and repeat visits. By clicking “Accept”, you consent to the use of ALL the cookies.
Cookie settingsACCEPT
Manage consent

This website uses cookies to improve your experience while you navigate through the website. Out of these, the cookies that are categorized as necessary are stored on your browser as they are essential for the working of basic functionalities of the website. We also use third-party cookies that help us analyze and understand how you use this website. These cookies will be stored in your browser only with your consent. You also have the option to opt-out of these cookies. But opting out of some of these cookies may affect your browsing experience.
Necessary Toujours activé

Performance cookies are used to understand and analyze the key performance indexes of the website which helps in delivering a better user experience for the visitors.

Analytical cookies are used to understand how visitors interact with the website. These cookies help provide information on metrics the number of visitors, bounce rate, traffic source, etc.

Advertisement cookies are used to provide visitors with relevant ads and marketing campaigns. These cookies track visitors across websites and collect information to provide customized ads.

Other uncategorized cookies are those that are being analyzed and have not been classified into a category as yet.