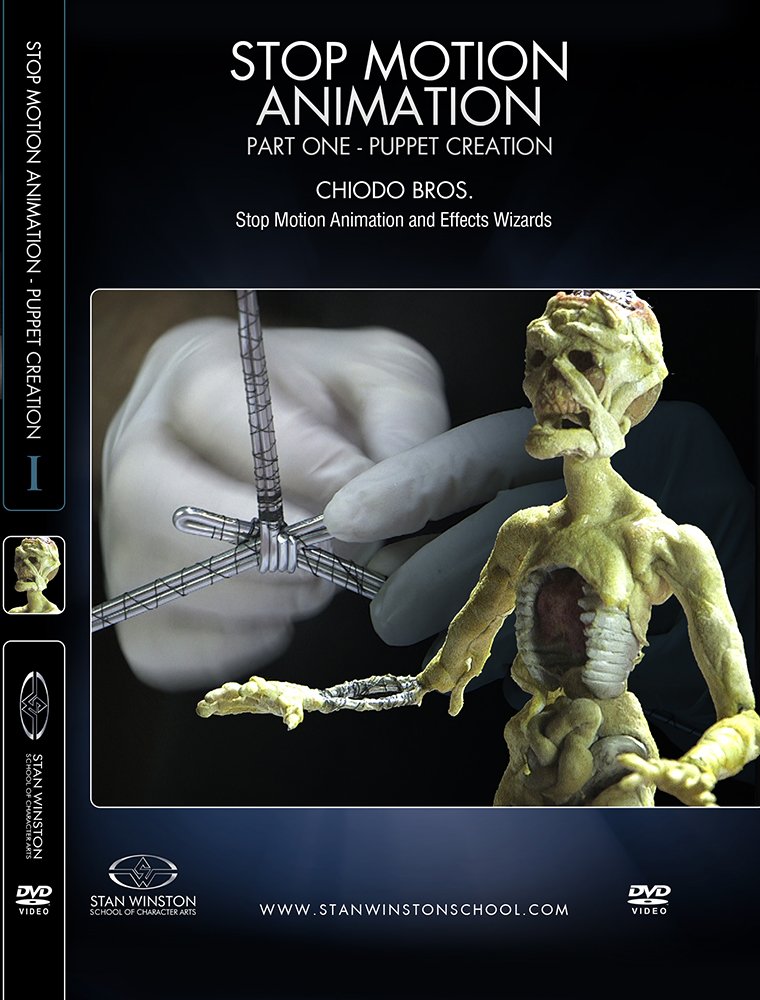 In PART 1 of their 4-part Stop Motion Animation webcourse series, the Chiodo Bros. (TEAM AMERICA, KILLER CLOWNS FROM OUTERSPACE, ELF) teach you to
build a puppet perfect for frame-by-frame filmmaking. From design to final costumed creation, Stephen, Charlie amp; Ed share insights, techniques and tips that will help you create a
posable character that is not only durable, but highly affordable.

Since forming their company in 1982, the Chiodo Brothers have built an outstanding reputation as an innovative production company with expertise in creating characters
using stop motion animation, live puppetry, make-up effects and animatronic props and costumes. Their goal - "To bring fantastic characters to life.

Stephen Chiodo has established himself as a highly creative special effects director with an expertise in stop motion animation and is co-chairman and head of creative
production. Depending on the project, he may serve as writer, director and/or producer for Chiodo Bros.

Stephen began his career by winning the Best Young Director Award at the Cannes Film Festival in 1976 while still a film student at Rochester Institute of Technology in New
York. In the early eighties, Stephen collaborated with Tim Burton and Rich Heinrichs as a Technical Director and Animator for the acclaimed animated short
Vincent. His directing credits include the first feature length clay animated film I Go Pogo, the award winning live action/animated special Cousin Kevin, episodes of Land of
the Lost and the Amazing Live Sea-Monkeys, and the cult classic Killer Klowns from Outer Space.

Most recently Stephen has developed and directed pilots for CNN, ShowTime and the Disney channel and has been sharing his experiences and knowledge by teaching stop
motion animation at the prestigious Califorina Institute of the Arts.

Charles Chiodo, artist, illustrator and designer, is co-chairman and head of production design. From storyboarding to final finishing, his job is to develop and oversee the art
direction of all projects.

Charles graduated Pratt Institue in 1974. Pursuing an illustration career, Charles landed a graphic artist position with ABC Eyewitness News in New York. After four years, he
left to work in Virginia as a production designer for I Go Pogo, a clay animated feature based on Walt Kelly characters. After, Pogo, Charles and his brother headed to Hollywood.

Through the 80s, Charles further developed his skills on low budget monster movies designing creatures big and small. For Shelley Duvall's FAErytale Theatre, he designed a
wide array of props and miniatures for various directors including Tim Burton and Francis Ford Coppola. Working closely with the brothers he brought a unique look
to their award winning After School Special, Cousin Kevin, and the cult classic feature, Killer Klowns from Outer Space.

For director John Favreau's ELF, Charles headed the team of artists and designed a 60s style stop motion look for the opening titles and North Pole sequences. Most
recently
for Team America, he made sure that the marionettes looked their best when they saved the world.

Now, Charles keeps busy developing original Chiodo Bros. properties and characters always with that childlike sense of wonder that affected him so many years ago. He does
what he did as a kid and hopes it will inspire young filmmakers for years to come.

Edward Chiodo, the youngest of the three, is co-chairman and head of corporate affairs. He is responsible for new business development, client relations and the overall
operations of the studio. He also serves as executive producer on all Chiodo projects.

Edward is a graduate of Hofstra University on Long Island where he studied Film/Communications. Prior to joining his brothers, Edward honed his talents coordinating and
overseeing various aspects of production in both Los Angeles and New York.

Stan Winston School of Character Arts is an educational media company dedicated to teaching the art and science of character creation.
SWSCA is partnered with the majority of Hollywood's top effects artists and studios to develop, produce, and distribute ultra-high
quality online Creature FX video tutorials teaching the innovative techniques and processes used to create cinema's most memorable
characters.

SWSCA's educational content is subscription-based and will cover the full spectrum of character effects, from traditional approaches to
the state-of-the-art Hybrid Practical/Digital Approach that has become the cornerstone of today's box office hits.

A penetrating exploration of race, sisterhood, and the powerful forces at work that allow some to flourish…and others to falter.

Word According To Karp

The Inheritance of Orquídea Divina

A gorgeously written novel about a family searching for the truth hidden in their past and the power they’ve inherited.

Plus, receive recommendations and exclusive offers on all of your favorite books and authors from Simon & Schuster.

By clicking 'Sign me up' I acknowledge that I have read and agree to the privacy policy and terms of use. Free ebook offer available to NEW US subscribers only. Offer redeemable at Simon & Schuster's ebook fulfillment partner. Must redeem within 90 days. See full terms and conditions and this month's choices.

Thank you for signing up, fellow book lover!

Tell us what you like and we'll recommend books you'll love.

Thank you!
Your registration is complete.